We live in a digital world, where each person’s documented past is accessible at the stroke of a key and click of a button. This powerful technology can literally save a life—medical records can be accessed in seconds, assisting in diagnostics and preventing allergic reaction. On the other hand, anyone with access to the internet can rummage through your past, including the most challenging and difficult moments. For many people, some serious mistakes led to criminal conviction. In the past, the decision to disclose was a delicate balance of transparency versus privacy, with the choice ultimately residing with the individual. That choice has been stripped away, and we wear our past on our sleeves.

Even the bored and nosey next-door neighbor can sneak a peek behind your curtains.

For those with shame over their criminal record, know that you are not alone. It is estimated that over 30% of the adult population has a criminal record of some sort. That is one in three of all Americans. The next time you are in a group of people, look around and do the math—even if you have a clean record, someone close does not. The number of people with serious convictions are likewise staggering. When only looking to those convicted of a felony offense—a crime punishable by more than one-year imprisonment—the figure is shockingly high, nearly 10% of the population. These statistics are sadly skewed against minorities in our country, comprising a disproportionate segment of the incarcerated population.

Having a criminal record is a serious barrier in many aspects of life. Employment, housing, 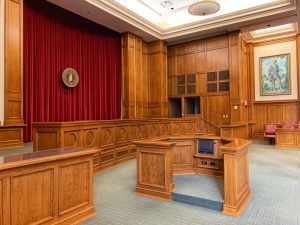 education, etc. can be severely impacted. Even after an individual has paid their debt to society and served their punishment, the consequences continue indefinitely. Keeping an individual within the criminal justice system does not provide a net benefit to society, but unemployment, lack of housing, and lack of education are all contributory factors to criminality.

Although many believe eligibility is too restrictive (which is the subject of new legislation discussed below), Michigan law provides an avenue for the expungement of certain criminal convictions. Individuals with one felony conviction or two or fewer misdemeanors are eligible under statute to petition the circuit court in the county in which the conviction occurred. To be eligible, the petitioner must have had not had any criminal convictions in the preceding 5 years. Once the petition is filed, the decision still remains in the sound discretion of the Court, meaning the judge presiding over the case must feel persuaded that the petitioner has truly reformed and that removing the conviction is in the public’s best interest.

Although the availability of relief is fairly broad, certain convictions are not eligible, regardless of whether the other criteria have been met. First, certain serious convictions, such as those carrying a potential life sentence, are not eligible. Also, most crimes of a sexual nature are specifically  excluded as well. Finally, and unfortunately for many people, all driving offenses are ineligible. This includes any driving offense involving alcohol.

Presently before the Michigan Legislature is a “clean slate” bill, which would overhaul the expungement system in Michigan. First, convictions that are not assaultive or a serious misdemeanor punishable by more than 10 years imprisonment would automatically be sealed after 10 years. A second would expand the eligibility up to three felonies if none are assaultive, and up to two felonies and four misdemeanors even if one is assaultive. The bill also acknowledges the new legal status of cannabis, providing relief to those convicted of marijuana related crimes. Although the ultimate disposition of these bills will not be known for some time, it is possible that Michigan will lead the way in this particular area of criminal justice reform.