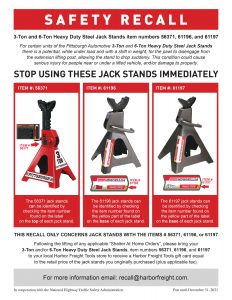 On May 3, 2020, Harbor Freight Tools, a discount tool and equipment retailer headquartered in Calabasas, California, issued a recall of over 1.2 million jack stands. Jack stands are a device placed under a vehicle—or other large piece of equipment— to keep it in an elevated position after it is lifted using a jack. The recall warned that the ‘pawl,’ a circular saw blade shaped piece of metal that is part of the assembly which ratchets the jack into place, was flawed, causing inconsistency in the engagement of the ratchet teeth. The ratchet teeth could disengage, dropping the load to the ground. This potential is an obvious and serious danger to anyone working under or around the vehicle. The recall affected the ‘Pittsburgh Automotive 3 Ton Heavy Duty Steel Jack Stands’, sold throughout Harbor Freight Tools’ 1,000 retail stores as well as its robust mail-order and e-commerce business.

After the initial recall, Harbor Freight Tools began to systematically test all of its jack stand products, as all of the Pittsburg Automotive jack stand product had been manufactured by the same company, Jiaxing Golden Roc Tools Co., Ltd. Seven days later, the company issued an additional recall of 454,000 Pittsburgh Automotive 6 Ton Heavy Duty Steel Jack Stands, for the same reason. Harbor Freight Tools laid blame at the feet of the manufacturer, alleging that aging of production tooling was the cause of the flaw. To minimize the damage to the retailer’s brand image, the company sent replacement jacks customers that purchased the defective product.

Astoundingly, on July 7, 2020, Harbor Freight Tools had to issue a third recall, this time because it “identified a welding defect” in the jack stands sent to replace the previously recalled product. ” Although the company recalled all 454,000 replacement jack stands, it claimed the defect was only present in a “small number” of the units. Harbor Freight Tool’s CEO and founder, Eric Schmidt, said the company was “disappointed and embarrassed’ about the entire situation.

The stands are designed to allow people to operate on the undercarriage of a vehicle—in some cases, a six-ton vehicle. The injury potential is very high, as there are certain to be individuals who purchased the product that are unaware that they own one of these devices. The nature of the jack stand and work it is used to perform make any failure likely to cause serious injury or death. If you or a loved one has suffered an injury due to a failing jack stand, contact the experienced dangerous product attorneys at Neumann Law Group for a free consultation. You may be entitled to significant compensation.