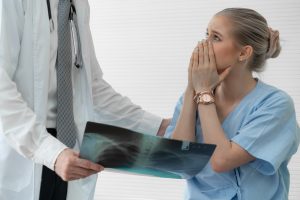 The Michigan Supreme Court recently issued an opinion stemming from a plaintiff’s medical malpractice case involving the misdiagnosis of a cancerous tumor. The plaintiff and her husband filed a lawsuit against a medical center and a physician, alleging that they erroneously advised the plaintiff that a tumor in her breast was benign. After the diagnosis, the woman continued to feel the lump in her breast growing and eventually sought follow-up care. Approximately two years after her original mammogram, the woman underwent a biopsy, which revealed an invasive carcinoma and metastatic breast cancer. Unfortunately, doctors discovered that cancer spread to her lymph nodes. The woman sought a second opinion, at which point the doctor suggested that her original mammogram may have been misread. In response, the woman and her husband filed a notice to sue, which tolled the statute of limitations for filing the case. In response, the defendants moved to dismiss the claim, arguing that the statute of limitations barred the claim.

Under Michigan’s statute of limitations (SOL), MCR 2.116(C)(7), personal injury plaintiffs, have two years to file a claim. In this case, the defendants argued that the two-year SOL had expired in 2015. Further, they claimed that the plaintiffs’ complaint was untimely under the state’s “discovery rule.” Michigan’s discovery rule statute MCL 600.5838a(2) mandates that medical malpractice plaintiffs file a lawsuit within six months after discovering the claim or from when they should have discovered the claim.

The Michigan Supreme Court was tasked with determining whether the plaintiff should have discovered the existence of her claim over the six months before when she initiated proceedings. In reviewing the claim, the Court explained that the woman discovered her mass in 2013 and sought treatment immediately. Despite the doctor’s conclusion that it was benign, she continued to monitor the mass and sought additional testing in 2014 and 2015. Further, she did not receive notice of a potential 2013 misdiagnosis until 2016. The facts indicate that a jury could conclude that the plaintiff engaged in due diligence. As such, the appeals court erred in concluding that the matter could be resolved in favor of the defendants at the summary judgment state. As such, the Court reversed and remanded the matter.

If you believe that a healthcare provider engaged in medical malpractice, contact the Neumann Law Group. The attorneys at our law firm are committed to justice and ensuring that our clients and their loved ones recover compensation for their injuries. The Michigan personal injury and wrongful death attorneys at our office handle claims stemming from medical malpractice, defective products, premises liability, nursing home abuse and negligence, work injuries and more. Our attorneys understand the aftermath of a Michigan negligence case, and we work to ensure that our clients are made whole again. Contact our office at 800-525-6386 to schedule a free initial consultation with a Michigan accident attorney on our legal team. Calling is to speak with an attorney is free, and we will not bill you for our services unless we can recover compensation on your behalf.