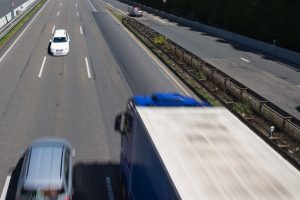 A wrong-way driver on the interstate in Michigan caused a head-on collision at night last month that resulted in serious injuries to the other driver. According to a local news report discussing the accident, a 37-year-old woman was driving a minivan headed north in the southbound lanes of I-75 when she collided with another driver who was driving a Cadillac SUV. Both drivers were seriously injured in the crash, and the driver of the minivan was trapped in the mangled wreckage of her vehicle for several hours before being extracted and taken to the hospital by ambulance.

It is more common than one would think for a driver to enter a divided interstate highway heading the wrong direction, especially at night. Most freeway exits have “wrong way” or “do not enter” signs facing the surface roadway to prevent drivers from inadvertently driving up the exit and into oncoming traffic. While the signs prevent some drivers from entering the freeway into oncoming traffic and certainly save lives, there is often only a single sign where the exit meets the roadway, and if a driver misses that sign and fails to notice the yellow line on the right side of the road, then it may appear that they are on the right track. The dangers from these crashes increases at night or when visibility is reduced, as drivers may not notice other signals that they are driving into oncoming traffic as easily as when visibility is better.

Determining fault and liability in the event of a wrong-way accident is usually quite simple, as the driver who is driving the wrong way was clearly negligent and should be held accountable for the crash. Legally, an accident victim can easily demonstrate that a wrong-way driver was negligent by demonstrating negligence per se, which is a legal doctrine for proving negligence that is centuries-old. To prove negligence per se, a plaintiff simply needs to show that the defendant was violating a law or regulation that was designed to prevent the type of accident that occurred, and that the defendant’s violation of the law resulted in damages or injuries to the plaintiff. Because wrong-way traffic laws are codified in the Michigan traffic code, proving liability in a wrong-way accident should not be difficult, although certain obstacles may still apply.

Have You Been in a Michigan Car Accident?

If you or someone you know has been hurt or killed in a Michigan car crash, the qualified Michigan personal injury lawyers at the Neumann Law Firm are here to help. Our experienced negligence attorneys understand how to prove liability for a car crash, and we know how to get the maximum damage awards for our clients. Our lawyers have helped hundreds of clients with all types of accident and injury cases, and we will fight to get you the compensation you deserve. To schedule a free initial consultation today, contact us at 800-525-NEUMANN (6386).